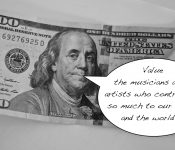 Why Pay the Musician?

Many people do not understand the world of a musician or why the payment of a performance is so crucial, whether it be a live performance, CD, album, steaming or download. The life or compensation of a musician is often not valued properly. How many times have you walked into a restaurant or club and a group or individual is performing, but there was not a cover charge? Many times a person doesn’t flinch when paying $7-13 for a glass of wine, but hesitates if there is a $5 cover charge for the musician. How about when an artist’s music gets streamed, and the payment is .003 cents?!

So, let’s delve into what goes into being a musician. First off, take in consideration how long the person trained or practiced in order to be the musician they are. Most likely it was years and years of practice and training. They may have taken years of private study or college and many times both! And even beyond private study or college, you have to rehearse, compose, arrange and learn new music all the time!

Second, let’s talk about the gear, whether it’s guitars, drums, keyboards or whatever. How much does the person have invested in their instrument or sound system? Then you have to consider the upkeep of the instrument and the wear and tear. You may have to change strings regularly, replace drum heads, sticks or even need repair work as the instrument gets played night after night as well as rehearsal after rehearsal. Some classical musicians spend in excess of $30K on their instruments!

You also have to consider loading and unloading gear for the gig. How long does that take? Does it take a toll on the gear?

How about driving to the gig? How far is it and how long does that take?

Many people book their own gigs! How much time and research does that take?

I could get into the recording of an album or song and composing or arranging music here as well, but I’ll save that for a follow up blog.

Let’s think more deeply about the preparation. How long did the rehearsals last? How much practicing had to take place before you actually got to the rehearsal? How long did it take to do a sound check? How long did it take to build up the knowledge to even get to a point where you knew how to get the best sound from the instrument or set up the equipment for optimal performance? And perhaps the group or performer doesn’t do the sound, but perhaps they’re paying someone to run the sound and/or the lighting.

At the end of the night, the group or performer has to tear down the gear, take care of their instrument and drive home. So, if they made $50 or took the proceeds from a tip basket on the floor, one has to ask, was it all worth it? And considering all the variables just mentioned, they may have even lost money; especially if they bought a drink or grabbed some food before the gig began or on a break.

In my estimation (and I am biased) I believe it’s important to have an appreciation for what goes into the life of a musician. So next time you hire someone to perform or you’re out at a club hearing some live music, maybe now you’ll have a better appreciation for the musician and their value.